Serving Catholics for 25 Years
Menu
A+ A A-
CERC is an entirely reader-supported web site and non-profit charity. If you’ve appreciated
CERC and found it useful, please help us with a donation. Go here to donate.

One of the hidden treasures of the Martyrs' Shrine in Midland, Ontario, is the set of drawings by William Kurelek.

These painting depicting St. Jean de Brebeuf and his companions, the 17th century Jesuits, whose gentle missionary life among the Huron or Wendat people came to a tragic end when the Huron nation was destroyed by the Iroquois in 1649, and the Jesuits abandoned the Sainte Marie mission.

Kurelek is one of Canada's iconic painters.  His works hang in the National Art Gallery of Canada, the Art Gallery of Ontario, and numerous collections, private and public throughout the country.  His great output covered Canadian life both urban and rural, past and present — and even future through his Dali-esque apocalypses.  For a fuller description of the enigmatic but fascinating artist, see "The Resurrection of William Kurelek".

To my knowledge, there are no reproductions of the "Huronia Mission Paintings" drawings in print [except for a 1991 academic monograph].  For many years they were displayed behind glass beneath the church at the Shrine, and it was difficult to take good photographs of them.  They are now in archival storage while the Shrine church awaits development [update: the paintings are being sold to pay for much needed renovations of the Shrine church].  But the following give a sense of the drawings' originality.  The inmistakable style of Kurelek, as well as his own personal devotion (he converted to Catholicism in 1957), are evident in the composition of persons and events.

(Click on images to enlarge.  The captions are Kurelek's own titles ) 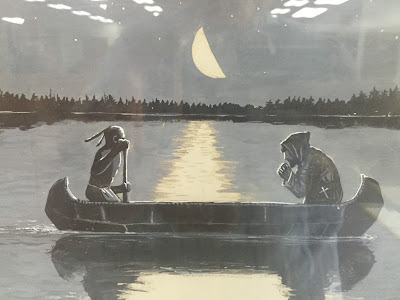 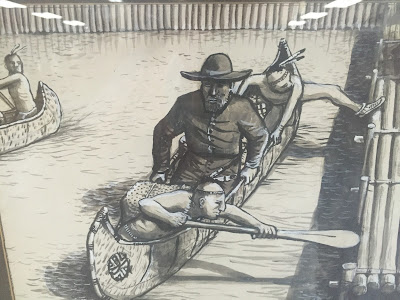 2.  Father Brebeuf setting out from Three Rivers on mission to Huronia. 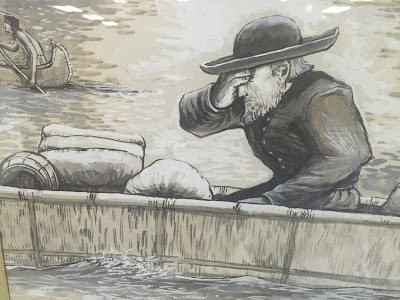 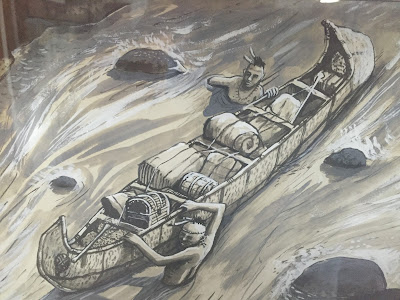 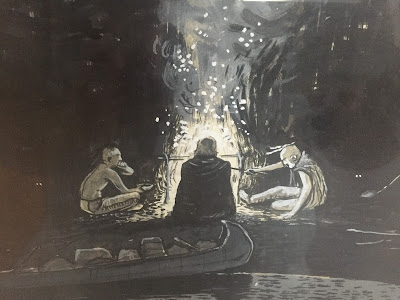 5.  Father Brebeuf and guides turning in during the voyage.
Brebeuf described his own experience of 1634 as follows: "To be sure, I was at times so weary that my body could do no more.  But at the same time my soul was filled with great happiness as I realized that I was suffering this for God.  No one can know this feeling unless he has experienced it."
(6.  Map showing Three Rivers to Huronia Route.  Not pictured here. Similar to the one below, it showed the route, which went from the St. Lawrence, up the Ottawa River, then across through Lake Nipissing and the French River, and south to the bottom of the Georgian Bay.  The trip took about a month.) 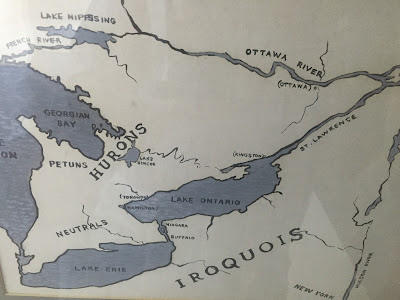 The land called Huronia is a relatively small but fertile region between the Georgian Bay, Lake Huron and Lake Simcoe in present-day Ontario.  The Huron/Wendat were unusual among native peoples in that they were primarily an agricultural nation, planting vast crops of corn, beans and squash, and fishing in the abundant waters of the nearby lakes.  Other tribes, such as the Algonquin and Petun, would trade with them for food. 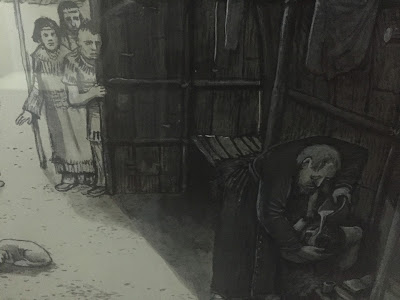 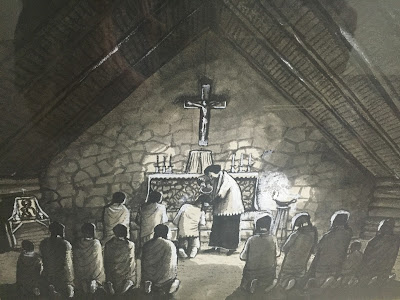 9.  At the height of Huronia mission, thousands came into the church.
In this drawing, Brebeuf is depicted baptizing the neophyte converts in the St. Joseph Chapel at Sainte-Marie. 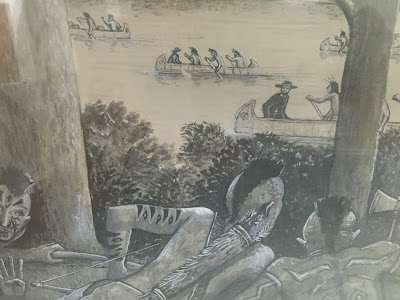 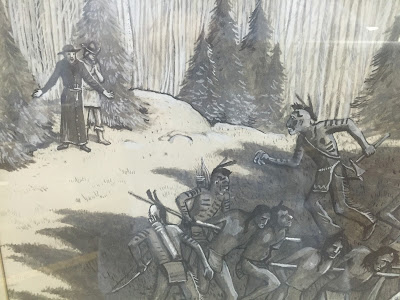 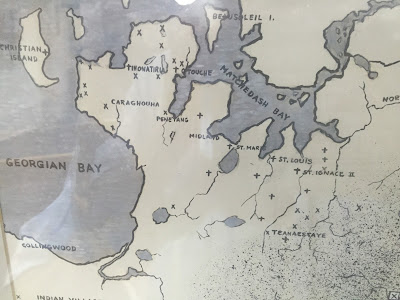 In 1649 a large army of Iroquois warriors was making its way north into Huronia.  Though outnumbered, the Huron men decided to attempt to defend the village of St. Louis, and are depicted being blessed by a Jesuit, while another assists at evacuating the women, children and elderly. 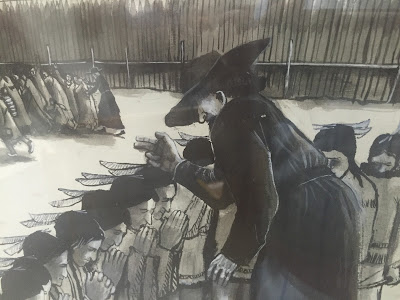 16.  Fathers Brebeuf and Lalemant prepare the mission fort for the Iroquois attack. 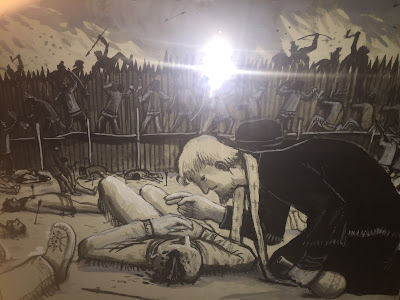 17.  They give last rites to dead and dying defenders.
According to historians, the Hurons repelled the first assault, and then a second.  But on the third assault the Iroquois broke through the palisade of stakes and took the village. 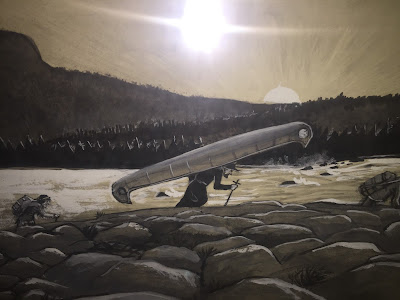 The Huron/Wendats had called Brebeuf "Echon", which meant "He who carries heavy loads". 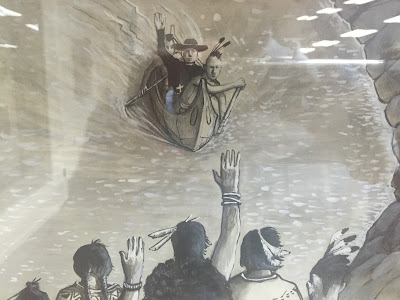 19.  Stories of Blackrobe courage travels ahead of them. 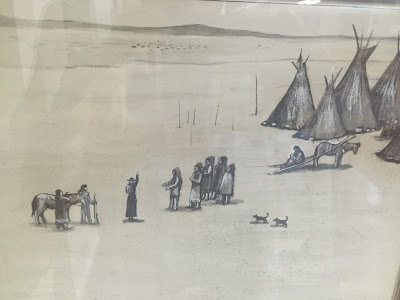 20.  Even the Plains Indains welcome the Jesuits.

After the destruction of Huronia, certain Jesuits and many Huron survivors in diaspora would spread Christianity across North America. 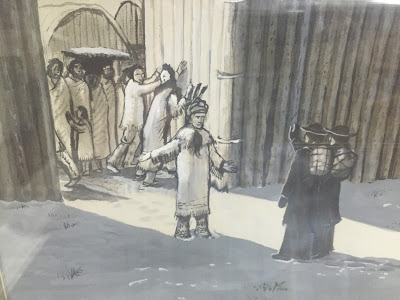 21.  And in the end even the dread Iroquois let them into their towns.
After a slow trial period in which a handful of Jesuits lived and worked among the Iroquois, during which 20-30 were baptized including five chiefs, in 1667 the missionaries began to serve all Five Nations of the Iroquois confederacy, and made notable converts such as the young Mohawk woman St. Kateri Tekakwitha.


Kurelek's drawings depict delicate relations between French missionaries and Huron/Wendat First Nations.  The mission was extremely difficult, but through careful learning of the language and observation of customs, their efforts afforded them a tact that won them many converts and friends. Kurelek probably read this letter that Brebeuf wrote to France, offering advice to aspiring young missionaries:
You must love these Hurons, ransomed by the blood of the Son of God, as brothers.  You must never keep the Indians waiting at the time of embarking.  Carry a tinder-box or a piece of burning-glass, or both, to make fire for them during the day for smoking, and in the evening when it is necessary to camp; these little services win their hearts.  Try to eat the food they offer you, and eat all you can, for you may not eat again for hours.  Eat as soon as day breaks, for Indians, when on the road, eat only at the rising and the setting of the sun.  Be prompt in embarking and disembarking and do not carry any water or sand into the canoe.  Be the least troublesome to the Indians.  Do not ask many questions; silence is golden.  Bear with their imperfections, and you must try always to be and to appear cheerful.  Carry with you a half-gross of awls, two or three dozen little folding knives (jambettes), a hundred or so fish-hooks, and some plain and fancy beads with which to buy fish or other commodities from the nations you meet, in order to feast your Indian companions, and be sure to tell them from the outset that here is something with which to buy fish.  Always carry something during the portages.  Do not begin to paddle unless you intend always to paddle.  The Indians will keep later that opinion of you which they have formed during the trip.  Always show any other Indians you meet on the way a cheerful face and show that you readily accept the fatigues of the journey...
Jesus Christ is our true greatness; it is he alone and his cross that should be sought in running after these people, for, if you strive for anything else, you will find naught but bodily and spiritual affliction.  But having found Jesus Christ in his cross, you have found the roses in the thorns, sweetness in bitterness, all in nothing.
— From "Instructions for the Fathers of our Society who shall be sent to the Hurons", Reuben G. Thwaites, ed., The Jesuit Relations and Allied Documents. Vol. 12, 118-121.

The Feast Day of the Canadian Martyrs is celebrated in the Roman Catholic Church on Sept 26 in Canada (and Oct 19 in the General Calendar).

John D. O'Brien, S.J., is the provincial assistant for vocations in the Jesuit Province of Canada. He resides in Toronto.. He blogs on theology, culture, film, technology, education, Jesuit life, sacred music and other delectables. His blog site is "Veritas Liberabit".